In the Foothills of the Austrian Alps: A Resilience Story

A few weeks ago, the Siebert family wrote to us, and their story reached out and touched us here at WACAP headquarters. We’ve been following them on Facebook, which has been great because mom Cherie is a photographer, and each new twist and turn in their story is beautifully captured by her artistic eye and camera lens.

This story tells of two children, WACAP kids adopted from the Waiting Children program in China.

Below, her photo journal reminds us of the strength of family, even when the way ahead is unsteady and the path is difficult.

“We adopted Kai Dong and Ming Qiao when they were 2-½ and 19 months respectively, both with clubfoot and Ming with spina bifida. My husband is Austrian, and our plan was always to get the children the medical care that they needed at Johns Hopkins, and then to eventually move to the Austrian countryside to give the family a better quality of life and the children better educational opportunities.”

Kai, 5 and Ming, 3. They were both treated at Johns Hopkins Children’s Hospital for clubfoot, and Ming had surgery for a tethered spinal cord related to her spina bifida.

Not long after the children came home, the family experienced what many other American families did, the crash of the housing market and economy, which impacted them greatly and delayed their plans for several years. They worked hard and finally did make it to Austria last year, settling in the remote foothills of the Alps.

On adjusting to a new life in Austria, Cherie reports, “Our kids are happy and healthy and we love them very much. They love their schools here and are beginning to speak German as well as they do English.”

Last week, she wrote about a new challenge that the family is facing:

“Now we have a different challenge—our family car (which we took to Austria) was one of those embroiled in a massive emissions scandal, and the manufacturer required us to ship the vehicle back to the U.S. at our own expense, and then proceeded to stonewall us with the buyback settlement.” 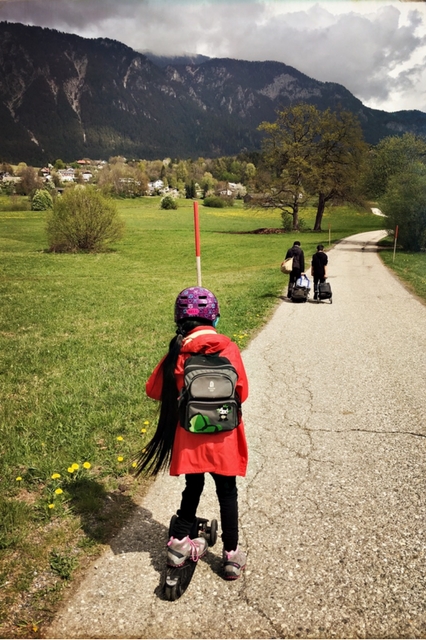 The family on the move again, just another beautiful but busy day

The situation has left the family stranded without a vehicle now for several months and has created a hardship for the entire family as they live in a remote region with limited public transport. Cherie says, “Our daughter Ming has a neurological deficit from the spina bifida that causes her to have limited use of her left leg, so walking 3 kilometers to the closest rail station is a real challenge, even with [the support of] her scooter. The rise up the hill on the return trip is extreme, as we live in the foothills.” 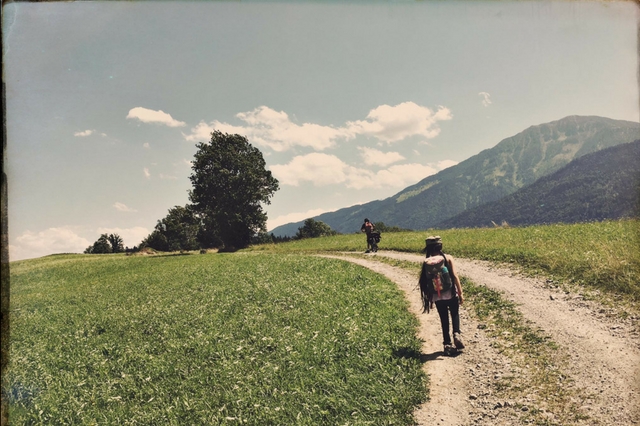 “13-year old Kai is superhuman. Ming and mom returned with varying degrees of mild heatstroke or heat exhaustion, but Kai made everyone food and then went back out with the bike to meet Papa at the station to get his heavy bags” — Cheri (Kai’s Mom)

Legal tangles and logistics nightmares have delayed the vehicle buyback and the family is counting on those funds to purchase a new vehicle, a sustainable electric van that will accommodate the children to their numerous medical appointments in the closest town. They’ve secured a sustainable energy vehicle subsidy from the Austrian government which will help additionally, but they are short the minimum down payment, and still need funds to pay for transportation until they can get the van.

For now, they walk to the nearest public transport station, spend time waiting in the hot sun, and pack groceries and supplies back and forth on an older bicycle, often logging 10-12 miles per day on foot. 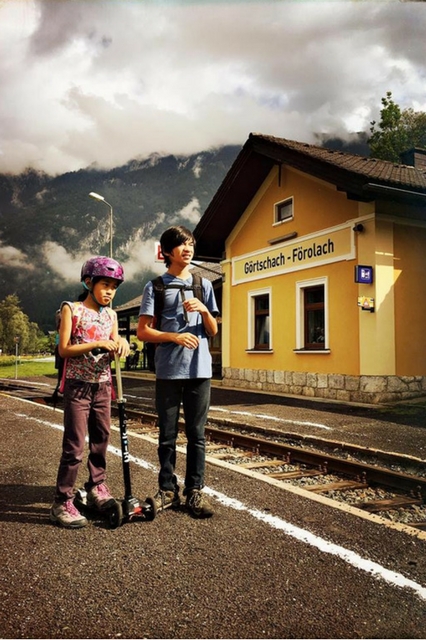 Ming and Kai, on the rails again

The transportation situation has been difficult on the children. Mom Cherie says the children are exhausted by the latest round of medical appointments they have scootered, walked, bused and ridden trains to. She reports that Kai is hanging in there, but Ming has become too fatigued and developed a bacterial infection and is on antibiotics. Thankfully the doctor caught it early and it’s not serious, “but she’s just worn out,” mom says. 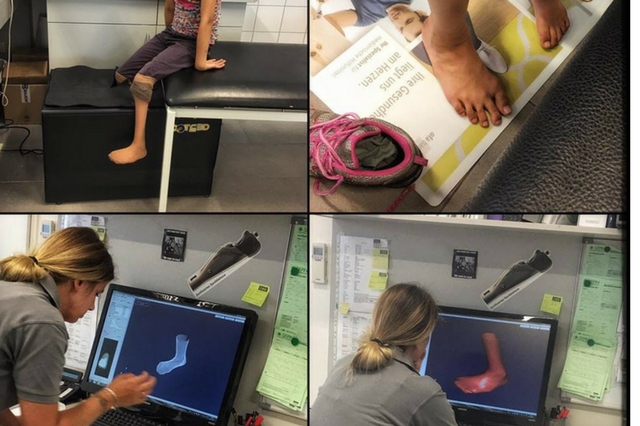 In spite of that, she says the kids have been such troopers. And looking at the pictures of their daily journeys, we don’t see unhappy children in difficult times. We see children challenged by conditions at birth, parents challenged by corporate legal tangles, a family challenged by a season where daily life is hard work.

The family had another adventure this week. The school forgot to notify them that the children had to be picked up, so Kai and his mom had to walk over to the next village where Ming’s school is. As they left, a thunder and lightning storm came in with rain and a hail warning. Amazingly, by the time they were halfway there, the sun came out and when they came back it was only raining lightly. Kai carried Ming’s scooter so she could have it on the trip back and everyone celebrated with ice cream. 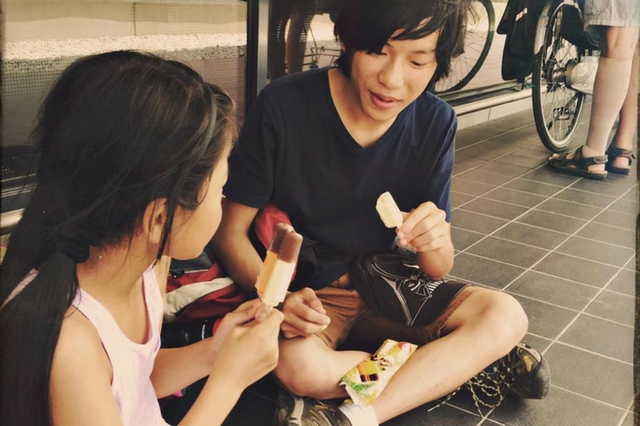 The very next day, Cherie says, “I thought I might get a second wind today (one can dream) but after the two days with the 10-12 miles walked, the heat, and the carrying of groceries over hill and dale…. I’m not good for much more than lying very still and enjoying the evening breeze. I harvested salad from the balcony and superhero Kai made grilled cheese, which we all put tons of salt on. Thank goodness the children and I don’t have to get up early or go anywhere tomorrow.” 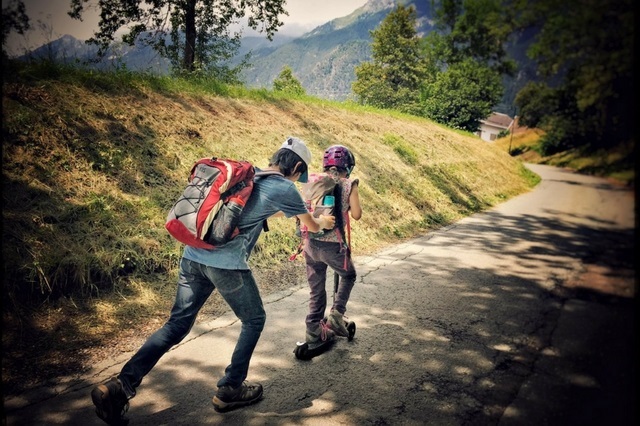 As the Siebert family waits for the vehicle buyback from the U.S. to finalize, hoping it happens in time to secure their new vehicle with a down payment, they continue daily treks across the hills of Austria. Back home their friends and family are watching their story unfold on Facebook, raising funds to help them with the mounting costs of the delay. 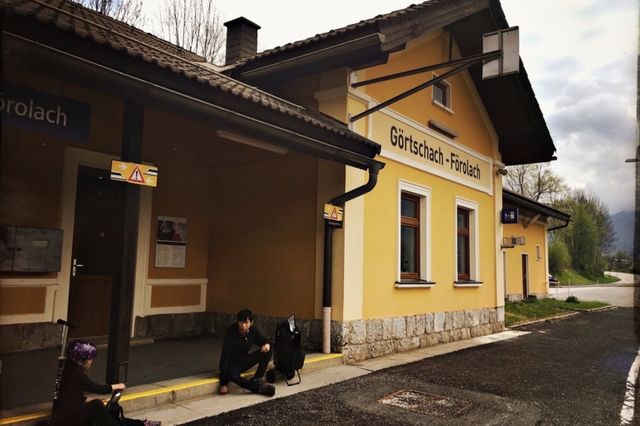 Just waiting on a train

Following along, we can’t stop thinking about them, and how they represent the balance of life: how challenges and troubles can often derail us, but other times the light shines through the cracks and we experience the triumph of resilience.

WACAP (World Association for Children and Parents) is one of the largest and most experienced international nonprofit adoption and child assistance agencies in the United States. Since 1976, we’ve placed over 10,000 children with loving adoptive parents and provided food, medical care and education to more than 200,000 children around the world.
View all posts by WACAP →
This entry was posted in Adoption, Adoptive Parents' Perspectives, International Adoption, Reflections, Travel and tagged adoption story, Austrian Alps, Challenges, Family, parents, resilience, Siblings, transportation, Travel. Bookmark the permalink.

3 Responses to In the Foothills of the Austrian Alps: A Resilience Story