Transgender Mom of 9 Children: “Most Meaningful Thing She’s Ever Done”

Finding out who we are is the story we’re all writing. It’s that journey of identity and becoming that Kathryn reflects on, as a parent of 9, as a person who’s transgender, and as a mom beloved.

Kathryn Mahan remembers when she knew she’d been born into the wrong body. “I was four years old, and in kindergarten,” Mahan recalls. “There was an event that happened with a little girl named Madeline, and I realized that I wasn’t like the other kids.” That’s because Kathryn, now 61, was born Harold Lamont Mahan.

Kathryn, known as Monty, back then, was raised in a conservative Christian home. And back in the early 1960s, there wasn’t a word for how she was feeling. “I couldn’t figure it out, and I got in trouble if I tried to talk to people about it. So I learned to keep my mouth shut,” Kathryn says. “In those days, if you were transgender or queer, there was no one to turn to. You just thought everything was your own fault.” 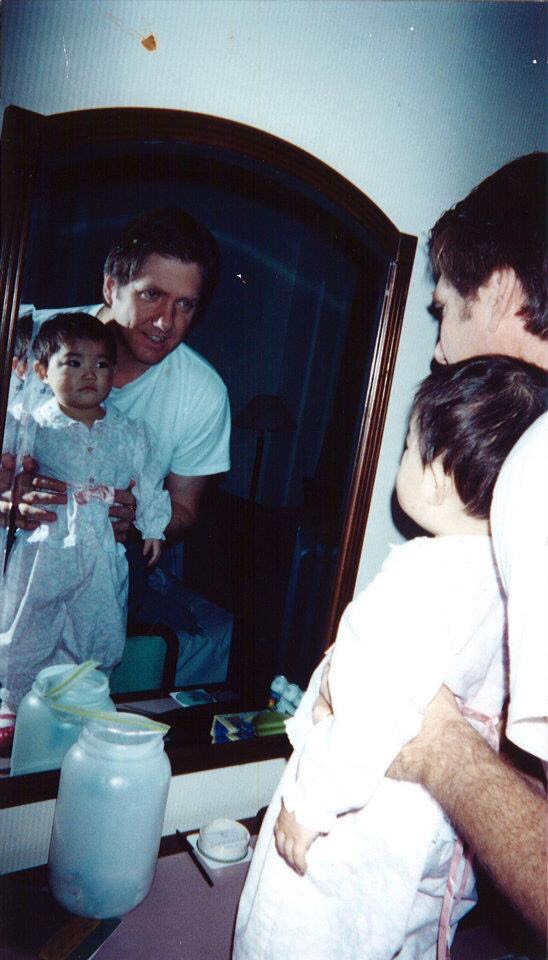 Monty holding Kailee in Hangzhou in 2000

Trying to be ‘normal’

“Neither of us even thought we could ever have kids,” Kathryn says. “We thought this was a chance to live semi-normal lives, and have kids.” She describes the marriage as “very loving, and built on friendship.”

The couple had one biological child, Jessica, in 1994, but subsequent pregnancies ended in miscarriage. They knew they wanted to grow their family, so they began to look into adoption. Monty was raised with lots of fostered kids in the house, and his sister, Angie, joined the family through adoption. But it was a co-worker’s daughter, adopted from India in the 1980s, who sealed the deal. “My co-worker had adopted from WACAP back in the early years of the organization,” Kathryn says, remembering a “beautiful, dark-skinned young woman” who made a huge impression.

‘I can still see their faces’
In 1997, after a 12-month process, Monty and his father traveled to Bangalore, India, to bring home William, a not-quite-two-year-old with spina bifida. “When I came out of that orphanage with William, I couldn’t get the faces of the other children out of my mind,” Kathryn says. “I can still see their faces, and feel them grabbing my hand.”

Through WACAP, Monty and his wife added seven more children from India, China, and the U.S. foster care system over the next nine years. Kailee, Pradeep, Sukanya, Raven, Austin, Justin, and Jyothi all had significant medical or emotional needs, and that was a deliberate decision. “Every time we decided to adopt, we looked at photos of waiting children,” says Kathryn. “We believed that God was selecting these kids for us, and placing them into our hearts before we ever saw their photos. I still believe that.”

Will, now 22, remembers that life at home was never boring. “A lot of my friends were only kids complaining that they never had anything to do, or anyone to hang out with,” he says. “At our house, you always had always had someone to be hanging out with—helping with chores, playing outside. For the most part, everyone got along really well.” 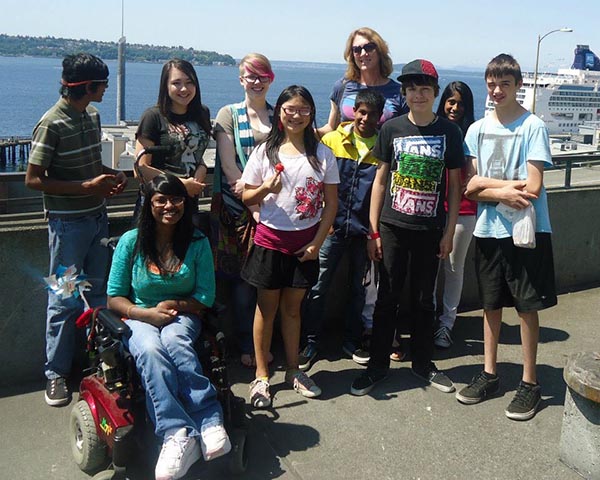 Things were beginning to fray in Monty’s marriage, though. Pretending to be “typical” had taken a toll on Monty, and in 2006, he began to take hormones to transition to Kathryn. Initially, he didn’t tell his wife, but he believed that the marriage would weather his transition to female.

One by one, Kathryn began to tell the kids about her transition, and her lifelong struggle. Some were sad about not having a ‘regular’ father, but none of them distanced themselves. Kathryn felt strongly that the kids should know about her sooner rather than later. “I know a lot of trans people who wait until the kids are older, but the kids have a set picture in their mind of their parents’ identity at that point. Those are the people who lose contact with their kids. I didn’t want that. My kids were everything to me.” 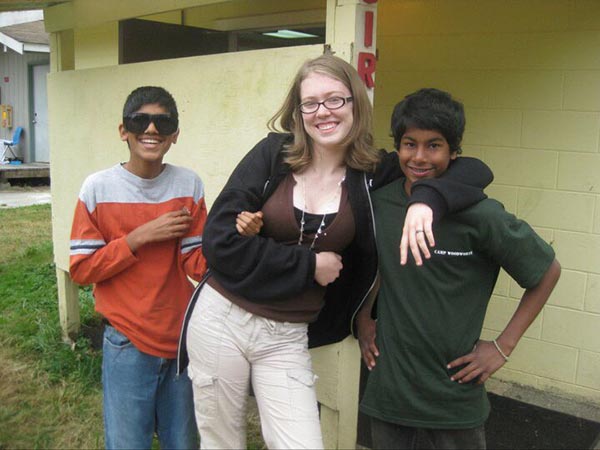 Pradeep, Jessica, and William at camp.

Jyothi, who joined the Mahan family at 7 ½, remembers being frightened by Kathryn’s revelation. In India, she’d endured neglect and abuse, and had been placed in an orphanage after running away. In the U.S., her first adoption was disrupted. She’d seen more change in her young life than most people see in a lifetime. “I didn’t know how my friends were going to react (to Kathryn’s transition), I didn’t how my life was going to pan out without having a dad,” says Jyothi, now 20. “But I knew I could get through it because I had eight other siblings who could relate. I wasn’t alone.”

What’s more, Jyothi believes that she and her siblings, each with their own difficult back-stories, were uniquely equipped to weather the change. “I think what got me through was that I put myself in Kathryn’s shoes. Would I want to be accepted? It goes back to the whole orphanage thing. How did I feel when I was neglected and abused? How would I feel if I were transgender?” 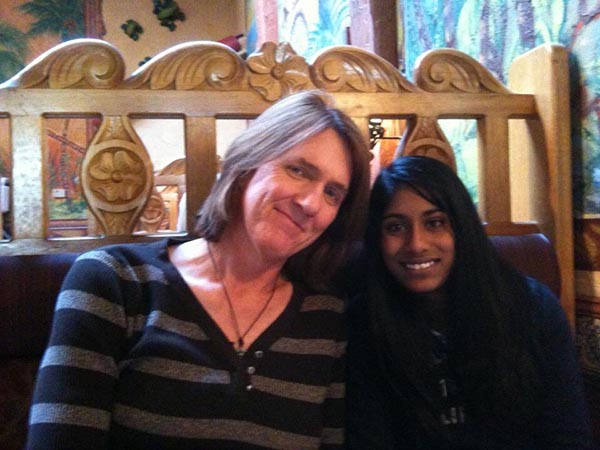 Next transition: ‘You’ve got a job to do’

Despite the support of her kids, Kathryn’s marriage continued to fracture. In 2011, Kathryn moved out with the children, into a nearly empty apartment in Puyallup. The next transition—single-parenting nine children while working full-time—was perhaps Kathryn’s biggest challenge yet. There were dark times, but Kathryn knew her children were worth it.  “I told myself: you’ve got a job to do. You’ve got to get these kids through high school.”

With Kathryn working to support them, the kids had to step up and take on more responsibility around the house. “We were at a spot where we had to count on each other, and lean on each other,” she says. The kids banded together to help out, and to protect and support each other. “That’s one of the good things about having a huge family—you know you can rely on each other,” adds Jyothi.

Though that period brought struggles for the family, it also revealed how strong they were—both individually, and as a group. “I learned to trust them, to speak openly and honestly with them about the issues we faced, and to give them both tough love, and a lot of forgiveness,” Kathryn says. “I also learned that you don’t need a bunch of money or a huge house to be a great parent.”

All nine of the Mahan kids graduated from high school and are all thriving young adults. Kathryn is proud of that. “Raising these kids successfully is the most meaningful thing I have ever done,” she says. “They are my testimony.” 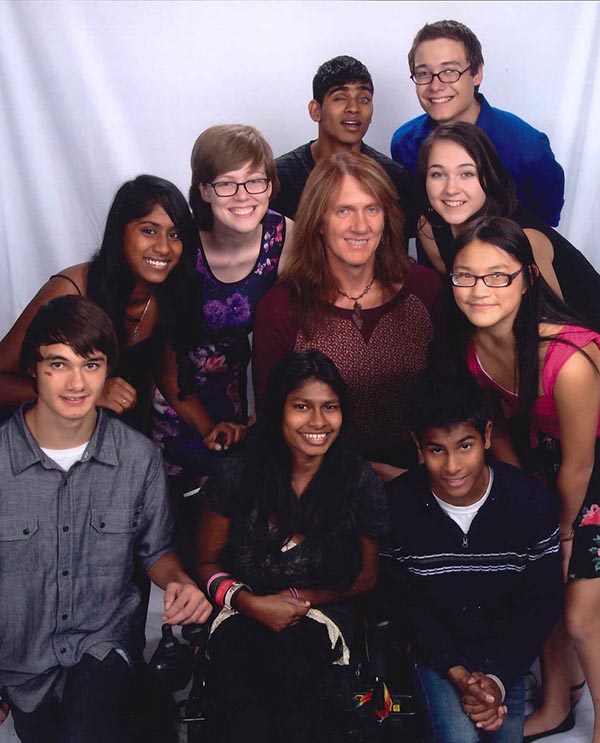 If you are interested in learning more about WACAP, contact us at wacap@wacap.org.  WACAP is recognized as a leader in serving and supporting LGBTQ families, and is proud to welcome all families in their journey to adoption through US Kids Foster Care. 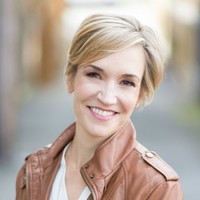 About WACAP Board Member, Kristin Kalning: Kristin joined WACAP’s board of directors in January of 2016. With a background in journalism, she has written for an array of news media, spanning msnbc.com to the Seattle Times. She recently left her job in communications to start a podcast about adoption, which launches in September 2018.
She and her husband are the parents of two children adopted from Ethiopia and from China.

WACAP (World Association for Children and Parents) is one of the largest and most experienced international nonprofit adoption and child assistance agencies in the United States. Since 1976, we’ve placed over 10,000 children with loving adoptive parents and provided food, medical care and education to more than 200,000 children around the world.
View all posts by WACAP →
This entry was posted in Adoptees' Perspectives, Adoption, Adoptive Parents' Perspectives, Images of Family and tagged children, identity, LGBTQ Parents, Love, medical need, Parenting, Transgender, Trauma-Informed Care, US Kids, WACAP. Bookmark the permalink.